A commemorative stamp was jointly released by the Philippine Postal Corporation (PHLPost) and NAMRIA in celebration of the 10th anniversary marking the official recognition of the Extended Continental Shelf (ECS) in the Philippine Rise. The stamp was officially launched at the NAMRIA Lecture Hall on 25 April 2022, 10 years after the adoption by the Commission on the Limits of the Continental Shelf (CLCS) of the United Nations (UN) of the Philippines’ submission for an ECS in what is formerly called the Benham Rise Region. NAMRIA Administrator, Usec. Peter N. Tiangco, PhD was joined in the event by Postmaster General and Chief Executive Officer Mr. Norman N. Fulgencio.
Producing the stamp
The conceptualization and designing of the commemorative stamp was spearheaded by the Geospatial Information Services Division (GISD) of the Geospatial Information System Management Branch (GISMB). The stamp features a relief map of the Philippine Rise Region with the outer limits of the Exclusive Economic Zone (EEZ) of the country extending up to 200 nautical miles from the main archipelago and the ECS. A short text signifying the 10th anniversary since the adoption in full of the ECS in the Philippine Rise is also included in the stamp.
The initial design from NAMRIA was endorsed to PHLPost in March 2022 to align its format with the standard templates for postage stamps in the country. NAMRIA’s submitted requirements underwent a rigorous vetting process. The official design of the commemorative stamp
Highlights of the event
The launching and unveiling event was participated in by key officials and staff from NAMRIA and PHLPost. Deputy Administrator (DA) Efren P. Carandang provided the welcome message for the event. He shared the history of events leading to the Philippine submission to the CLCS. He also noted the event’s importance for the entire country, saying that “the story of the Philippine Rise is now a part of history that has to be told over and over again until it is etched in the memory of every Filipino.”
Administrator Tiangco and Postmaster General Fulgencio led the unveiling of the commemorative stamp and the ceremonial signing of the official first day cover. Deputy Administrators Carandang and Fabic also signed on the official first day cover as part of their support to the activity. In his message, Postmaster General Fulgencio noted that the launching and unveiling of the commemorative stamp emphasized the country’s assertion of its sovereign rights over the Philippine Rise. He said, “The Philippine Rise postage stamp also aims to rekindle the sense of patriotism among our young people, develop their geographic awareness, and reassure them of our country’s sovereign rights, thereby leading to a better understanding of our history and culture.” Postmaster General Fulgencio also noted that the Philippine Rise stamp is only the second postage stamp in the country that features a map, following the issuance of the 1734 Murillo-Velarde Map stamp in 2021.
In his message, Administrator Tiangco said that the commemorative stamps immortalizes the success of the Philippines in its claim over the ECS in the Philippine Rise. He further said that this success is attributed to the years of data gathering and presentations made by the Philippine delegation to the UN CLCS. Administrator Tiangco acknowledged the support and guidance given by the Department of Foreign Affairs, Department of Environment and Natural Resources, Department of Justice, Department of Energy, National Security Council, National Coast Watch Council, University of the Philippines Institute of Maritime Affairs and the Law of the Sea, and the UP National Institute for Geological Sciences.
Other officials and staff in attendance from PHLPost include Chief of Staff (COS), Atty. Azeris B. Ong and Project Officer for Special Projects and Postal Outlets and concurrent Marketing Specialist, Ms. Jocelyn Edralin-Cacho. On the side of NAMRIA, the following officials attended the event: GISMB Director Febrina E. Damaso and Assistant Director Benjamin P. Balais; Hydrography Branch Officer in Charge (OIC)-Director, Capt. Antonio G. Valenzuela, Jr., and OIC-Assistant Directors, Capt. Carter S. Luma-ang and Capt. Jose T. Arevalo, Jr.; Mapping and Geodesy Branch Director Ruel DM. Belen and OIC-Assistant Director Brian A. Dela Cruz; Resource Data Analysis Branch OIC-Assistant Director Violeta A. Quiliza; and Support Services Branch (SSB) OIC-Director Concepcion A. Bringas.
The program culminated with PHLPost’s formal handing over of the stamp and official first day cover presentation frames to NAMRIA. The launching was hosted by Ms. Zenaida A. Leaño of the Administrative Division-SSB. The commemorative stamps and official first day covers or envelops will be available at the Caloocan, Makati, and Manila central post offices. 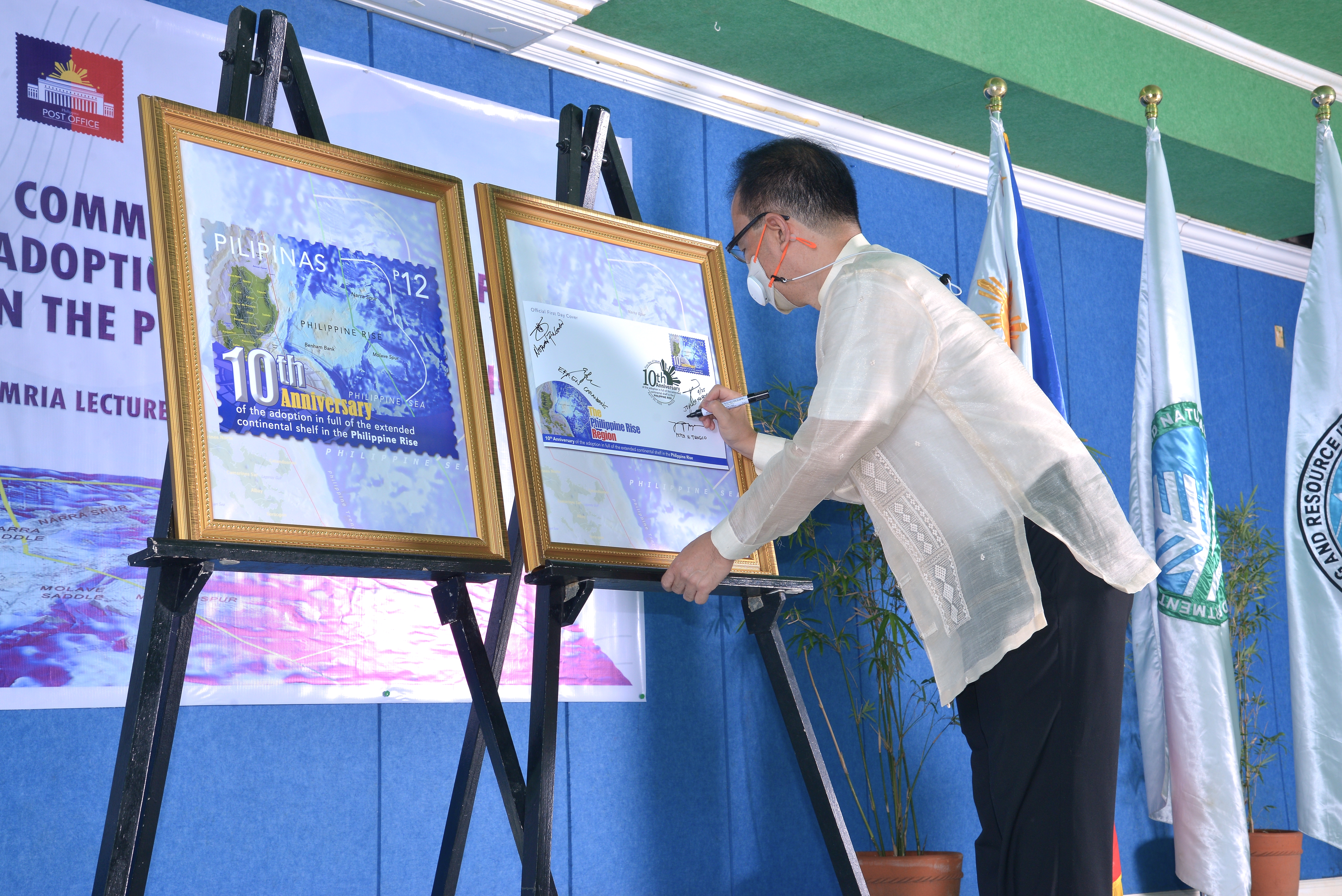 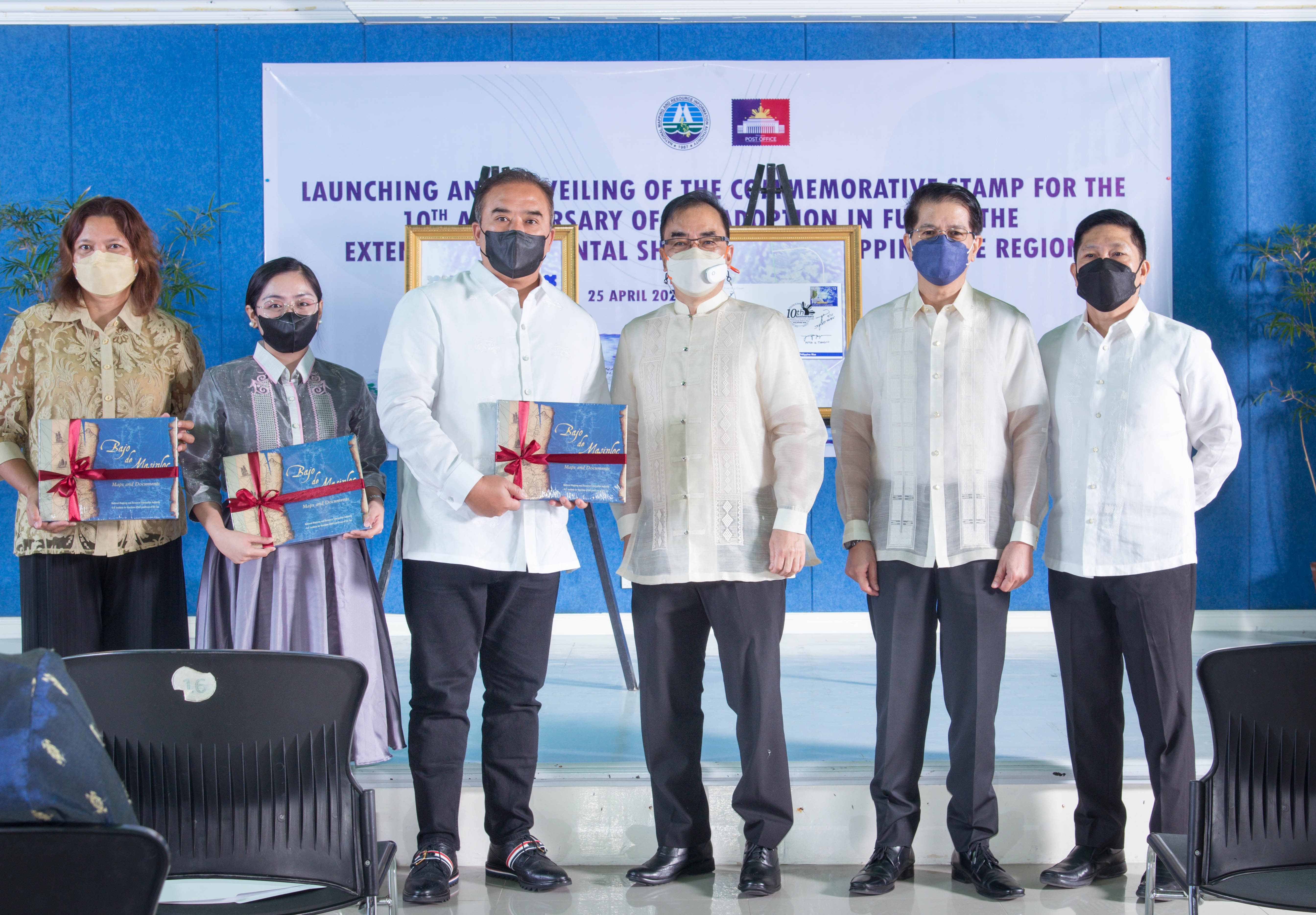 Administrator Tiangco (third from right) hands over the "Bajo de Masinloc: Maps and Documents" book to Postmaster General Fulgencio (third from left).  They are joined by Ms. Edralin-Cacho (leftmost) and Attorney Ong (second to the left) from PHLPost and Deputy Administrators Carandang (second to the right) and Fabic (rightmost) from NAMRIA.
-- VENER QUINTIN C. TAGUBA, JR.