NAMRIA celebrated its 34th Anniversary with the theme, NAMRIA @34: Resiliency and Innovations Amidst the Pandemic on 01 July 2021.  The event highlighted NAMRIA’s continued public service despite the impacts of a difficult year.  Resiliency, innovations, and investments on human resource allowed the agency to adapt to the changing environment.  Owing to the current pandemic and in consonance with the health and safety protocols set by the COVID-19 Inter-Agency Task Force for the Management of Emerging Infectious Diseases (IATF), the entire celebration was held online. 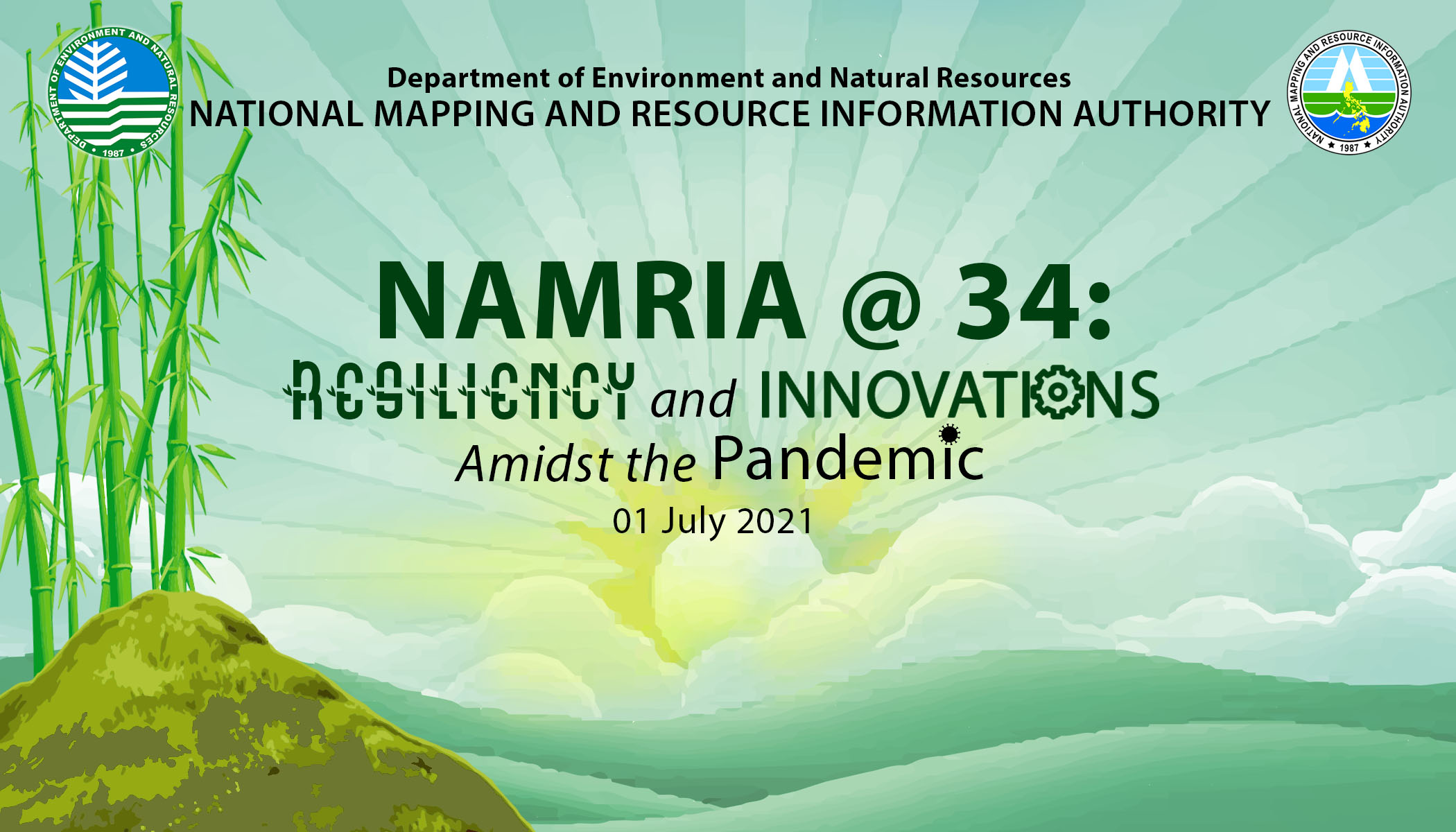 The Resource Data Analysis Branch (RDAB) facilitated the virtual program as this year’s branch host.  The activities were divided into two parts and were streamed using web conferencing platforms.  The first part of the program started with the singing of the NAMRIA hymn.  It was followed by messages from the following officials: Chairperson of the NAMRIA 34th Anniversary Virtual Celebration Organizing Committee and RDAB OIC-Director Ofelia T. Castro; NAMRIA Administrator, Usec. Peter N. Tiangco, PhD; and DENR Secretary Roy A. Cimatu, who was represented by Usec. and Chief of Staff Rodolfo C. Garcia. 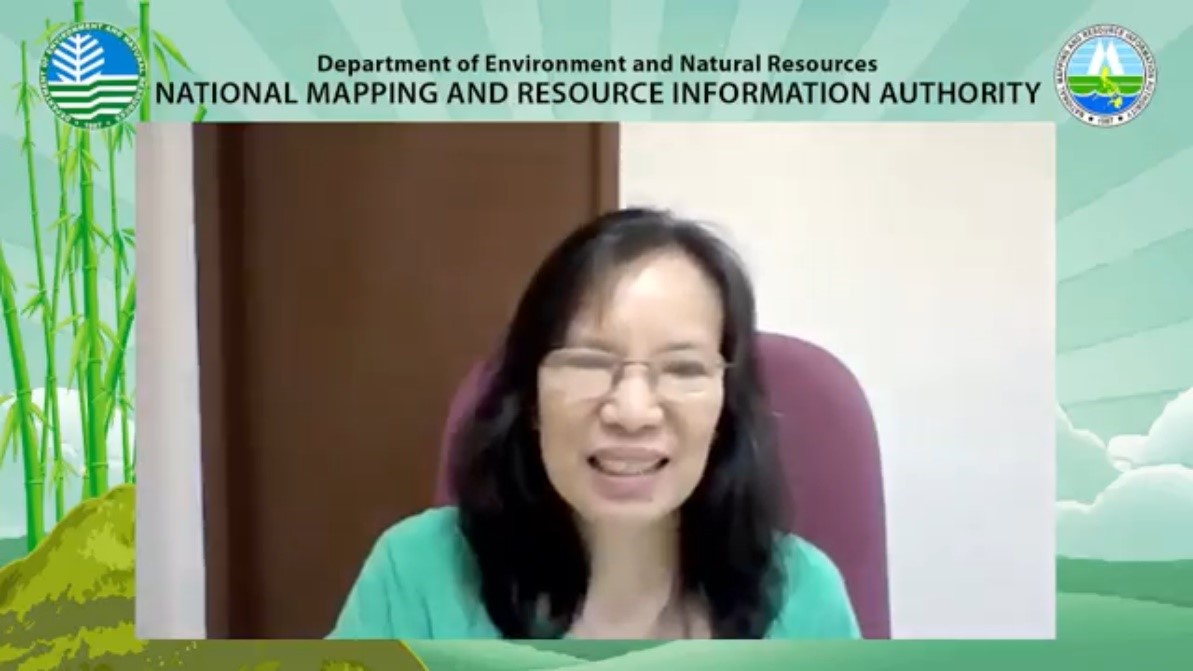 RDAB OIC-Director Castro delivers her message as Chairperson of the organizing committee.
Inspirational messages were given by . . . 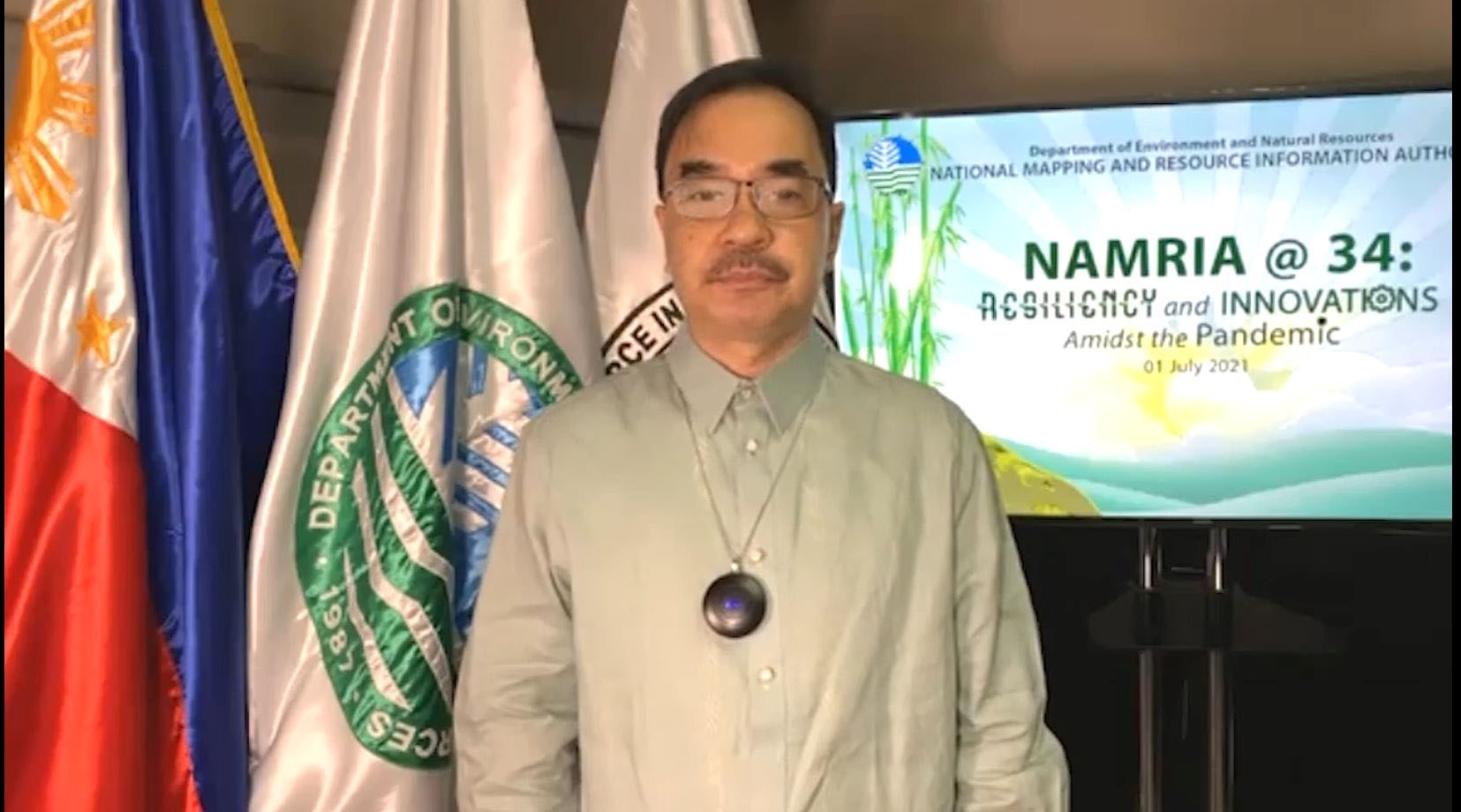 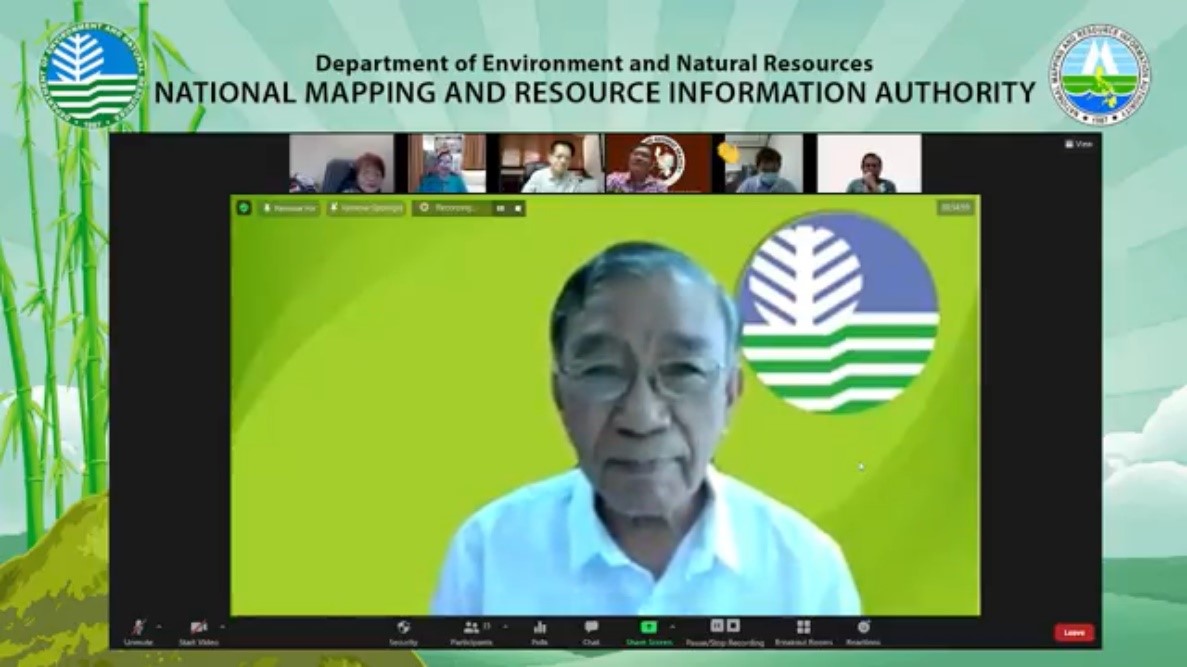 . . . and DENR Undersecretary Garcia.
In his message, Administrator Tiangco recognized NAMRIA’s collective action and great resolve which helped transform the agency as a resilient and innovative organization.  He said that as NAMRIA continues to implement its priority programs and projects, “Owing to the ongoing pandemic, our decisions and strategies will be made with the health and safety of our employees and clients in mind.”
Secretary Cimatu’s speech read by Undersecretary and Chief of Staff Garcia highlighted NAMRIA’s role in bringing progressive changes to DENR and the country and expressed the hope for the agency to “continue to position itself as the central mapping agency of the Philippine Government.”
The second part of the event started with the formal launching of the NAMRIA Branch Flags, Service Colors, and Emblems.  Alongside the Branch and Agency slogans, the Branch flags are part of the ongoing effort to redefine the identities of each of the five branches. 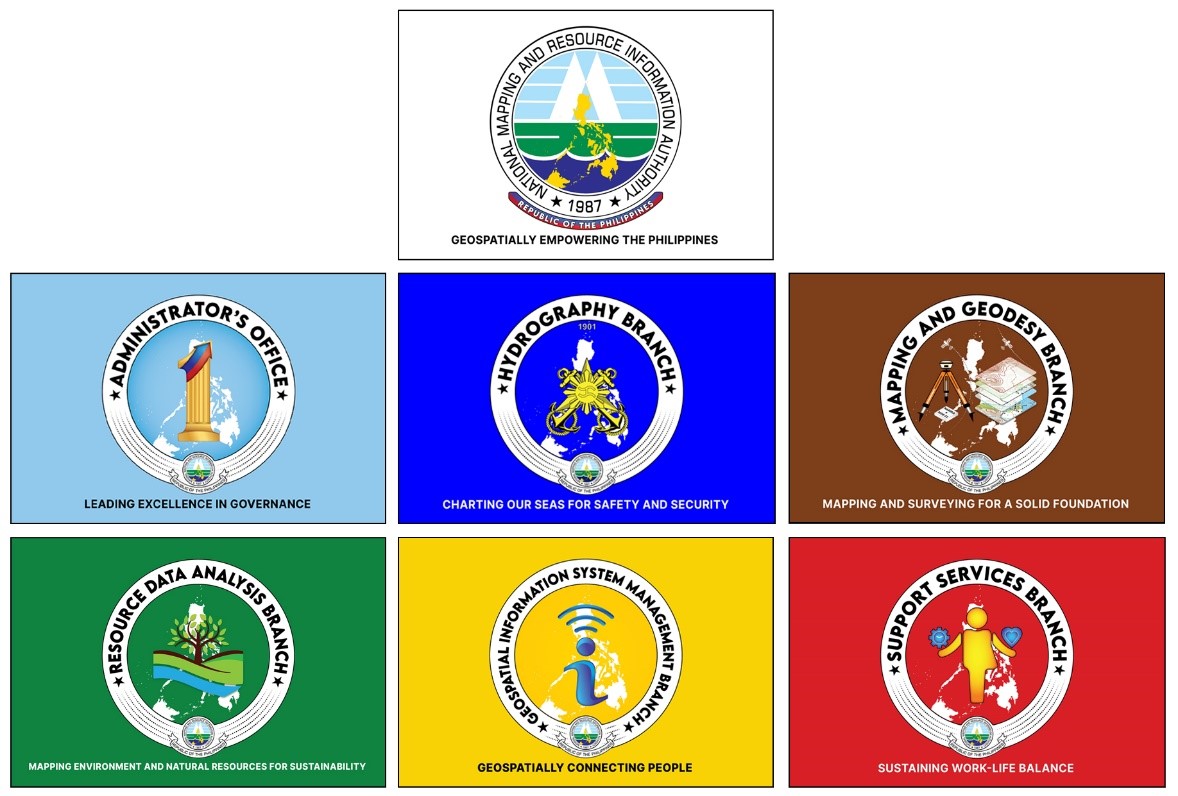 Collage of NAMRIA flags
NAMRIA’s 2020 Best Employee awardees, as well as the recipients of the Merit Performance award, were also recognized during the event.  The virtual celebration ended with an intermission number from the Branch host and the announcement of the winners for the Mr. and Ms. NAMRIA Vlogger.  Ms. Bonifacia B. Daet and Mr. Angelito P. Cinco from RDAB served as emcees for the program.
Winners of the Mr. and Ms. NAMRIA Vlogger 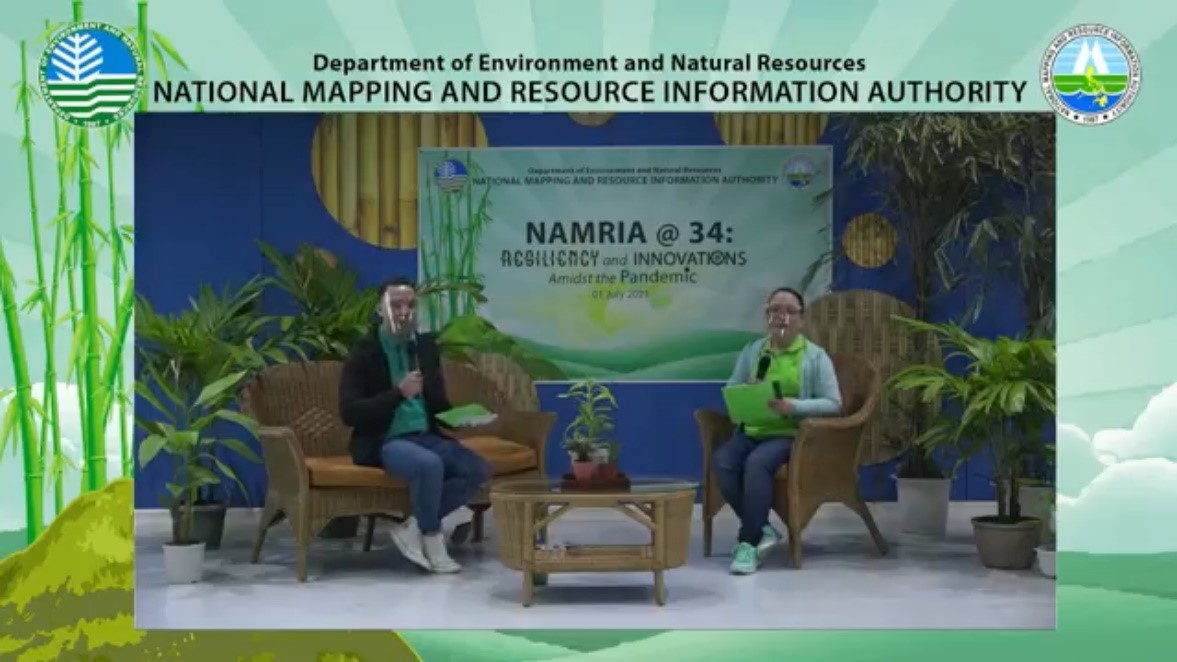