To raise awareness on the concepts of gender and women’s role in local and national planning development, the NAMRIA Gender and Development Focal Point System (GFPS) recently held a Gender Sensitivity Training (GST) for its members and the agency’s field team leaders on 23 March 2022. The virtual training is part of the month-long activities of the agency for the 2022 National Women’s Month Celebration (NWMC). This year’s NWMC slogan, Agenda ng Kababaihan, Tungo sa Kaunlaran focuses on the inclusion of women’s concerns in the government agenda. 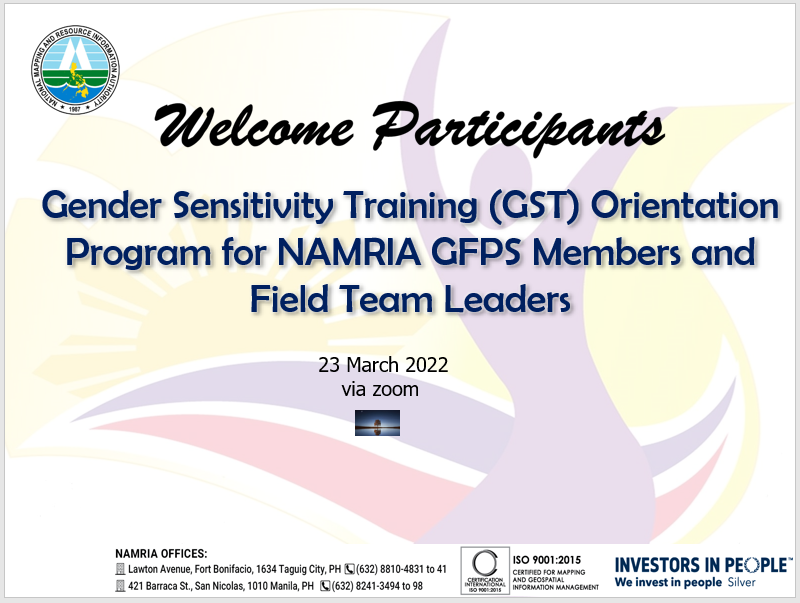 Resource Data Analysis Branch (RDAB) Director and NAMRIA GFPS Focal Person Ofelia T. Castro formally opened the virtual training. In her opening remarks, Director Castro said that the conduct of GST orientation programs is an effective way to reduce gender barriers in the workplace and community. The training also provides a platform to heighten the awareness of NAMRIA employees on gender needs and to protect gender interests towards achieving equally varied roles in society. Aside from the GFPS members, Director Castro also recognized the field team leaders as partners of the agency to introduce the NAMRIA GFPS to its stakeholders and partners.
Mr. Jeffrey A. Quodala from the Geospatial Information System Management Branch (GISMB) served as the resource speaker of the activity. Mr. Quodala provided a briefer on gender and development issues, saying that “gender issues permeate our lives.” He then stated that one of the gender issues is the automatic and mechanistic way of ascribing gender roles, which transcends from childhood to adulthood. Different institutions – from families/parents, schools, church, peers, government, workplace, and media also dictate gender roles which have certain implications on the lives of women and men. These inequalities contribute to the manifestations in gender bias, which include marginalization, multiple burden, subordination, and gender stereotyping. As a way forward, Mr. Quodala encouraged all participants to use learnings from the training to advocate for gender equality and women empowerment.
Mr. Petronilo S. De Leon, Jr. from the Human Resource Development Section, Administrative Division- Support Services Branch facilitated the conduct of the virtual training. 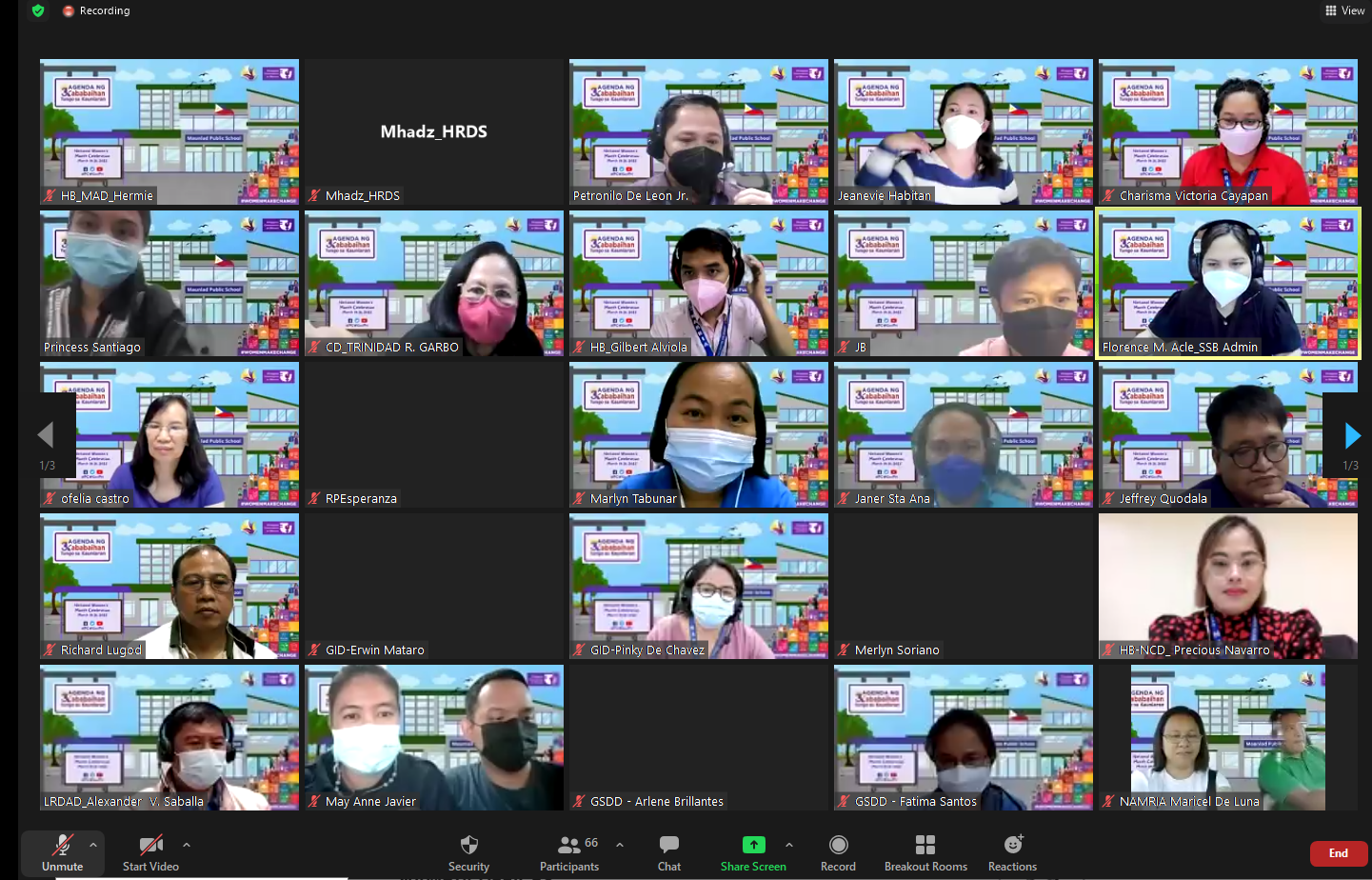 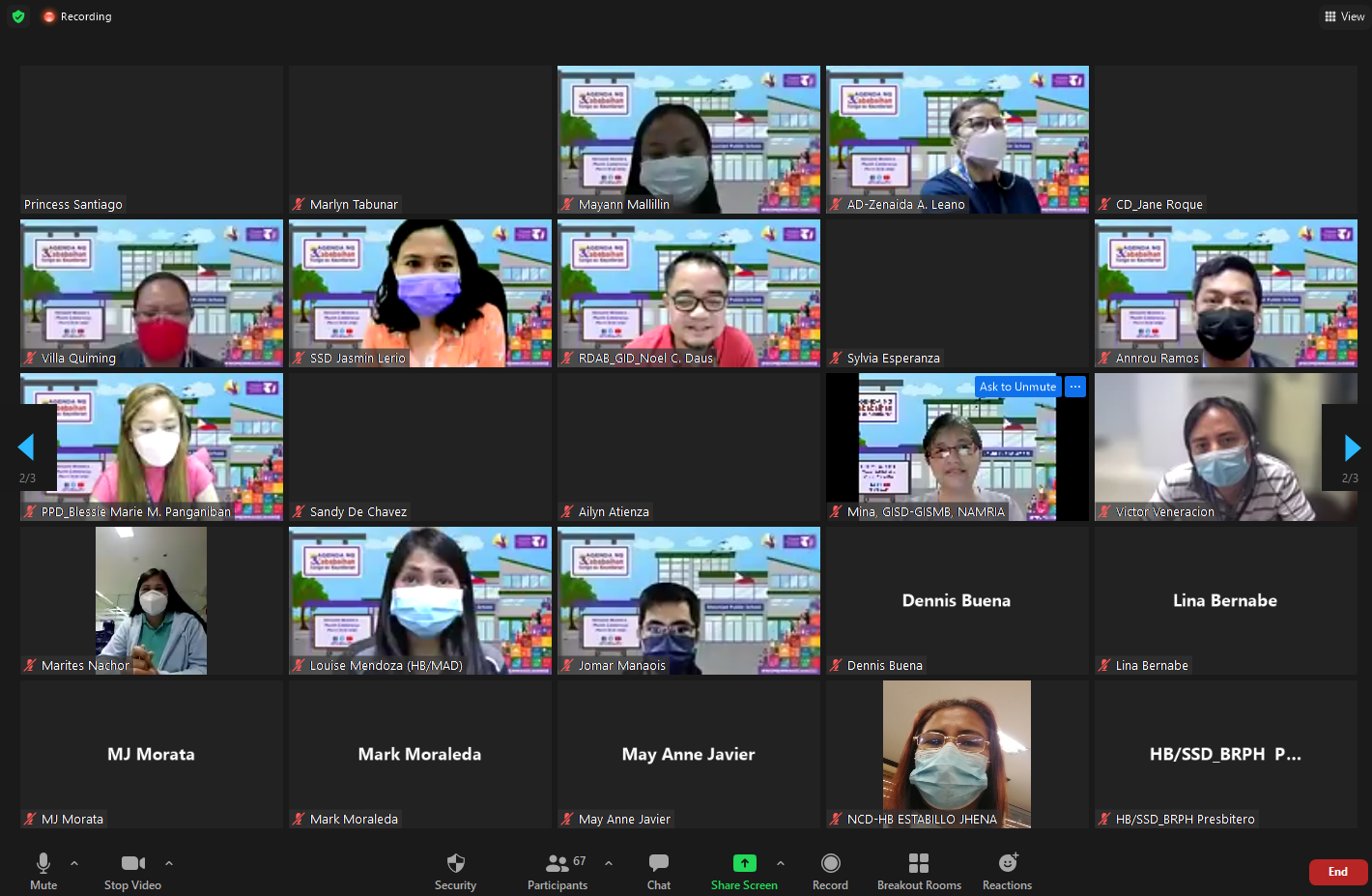 Screenshots of some of the training participants

Readers can email newscoop@namria.gov.ph or fax letters to +63-2 884-2855 for their comments and suggestions.